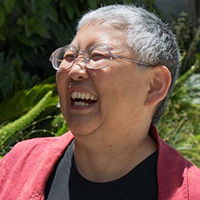 Mushim Patricia Ikeda is a meditation teacher, social justice activist, writer, diversity, equity, inclusion facilitator, and mother of a 32-year-old son. She has done both monastic and lay Buddhist practice over the past 35+ years, in the U.S., Canada, Mexico, and S. Korea. Her poetry, fiction and essays have been published widely in journals and anthologies such as Lion’s Roar, Buddhadharma, and Innovative Buddhist Women: Swimming Against the Stream. Mushim was coeditor of Making the Invisible Visible: Healing Racism in Our Buddhist Communities. Her work has been featured in two documentary films, Between the Lines: Asian American Women Poets and Acting on Faith: Women and the New Religious Activism in America, a documentary presenting portraits of three women activists of minority faiths in the U.S. A former longtime volunteer in the Oakland public schools, Mushim is also a core teacher and community director for the East Bay Meditation Center in downtown Oakland, California, US. www.mushimikeda.com

Retreat for those who self-identify as BIPOC.