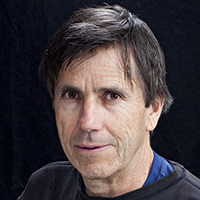 Don Usner, a thirteenth-generation New Mexican, grew up in the midst of one of North America’s most striking natural and cultural landscapes, where he developed a passion for the natural world and for diverse cultures. He studied Biology and Environmental Studies at the University of California at Santa Cruz. Usner’s affinity for photography was greatly nurtured there and during his subsequent tenure on an ecological reserve in Big Sur, where he lived and co-authored his first book, The Natural History of Big Sur. Don returned to New Mexico to earn an M.A. in Cultural Geography and to write Sabino’s Map: Life in Chimayó’s Old Plaza, published in 1995 by the Museum of New Mexico Press. He has since written and provided photographs for several more books, including, most recently, Órale: Custom Made in New Mexico, Chasing Dichos through Chimayó, and Valles Caldera: A Vision for New Mexico’s National Preserve.

Don was named a New Mexico Luminaria by the New Mexico Community Foundation in 2013, an award given to New Mexicans who “ motivate, inspire and support the dreams of others, promote diversity and equity, and build community strength through their leadership and vision.” He is nurturing more book projects as he works as a writer and photojournalist in Santa Fe.