Skilled and Compassionate Guidance Vallecitos Mountain Retreat Center guided meditation retreats are led by the most skilled and capable teachers... 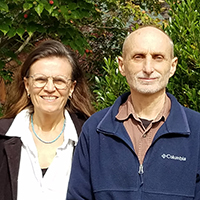 From a London Anglo-Irish family, Thanissara started Buddhist practice in the Burmese school in 1975. She was inspired to ordain after meeting Ajahn Chah and spent 12 years as a Buddhist nun where she was a founding member of Chithurst and Amaravati Buddhist Monasteries. She has facilitated meditation retreats internationally the last 25 years and has an MA in Mindfulness-Based Psychotherapy Practice from Middlesex University & the Karuna Institute in the UK. Thanissara is co-founder of Dharmagiri Sacred Mountain Retreat, South Africa and has authored several books. Her most recent is Time To Stand Up, An Engaged Buddhist Manifesto for Our Earth. She currently lives in Sebastopol, CA.

From Tennessee USA, Kittisaro graduated from Princeton as a Rhodes scholar and went on to Oxford before going to Thailand to ordain with Ajahn Chah in 1976. He was a monk for 15 years and during that time helped found Chithurst Monastery and Devon Vihara in the UK. He also taught extensively during this time and was involved in the training of monks. He disrobed in 1991 and since then has taught internationally in the States, Europe, South Africa, and Israel. He has studied and practiced Chan and Pure Land for 35 years informed by the Chinese school of Master Hua. Kittisaro has completed two one year-long silent self-retreats and is co-founder of Dharmagiri Sacred Mountain Retreat, South Africa and is co-author, with Thanissara, of Listening to the Heart, A Contemplative Journey to Engaged Buddhism. He currently lives in Sebastopol, CA.